The ‘invisible food’ that prevents your weight loss 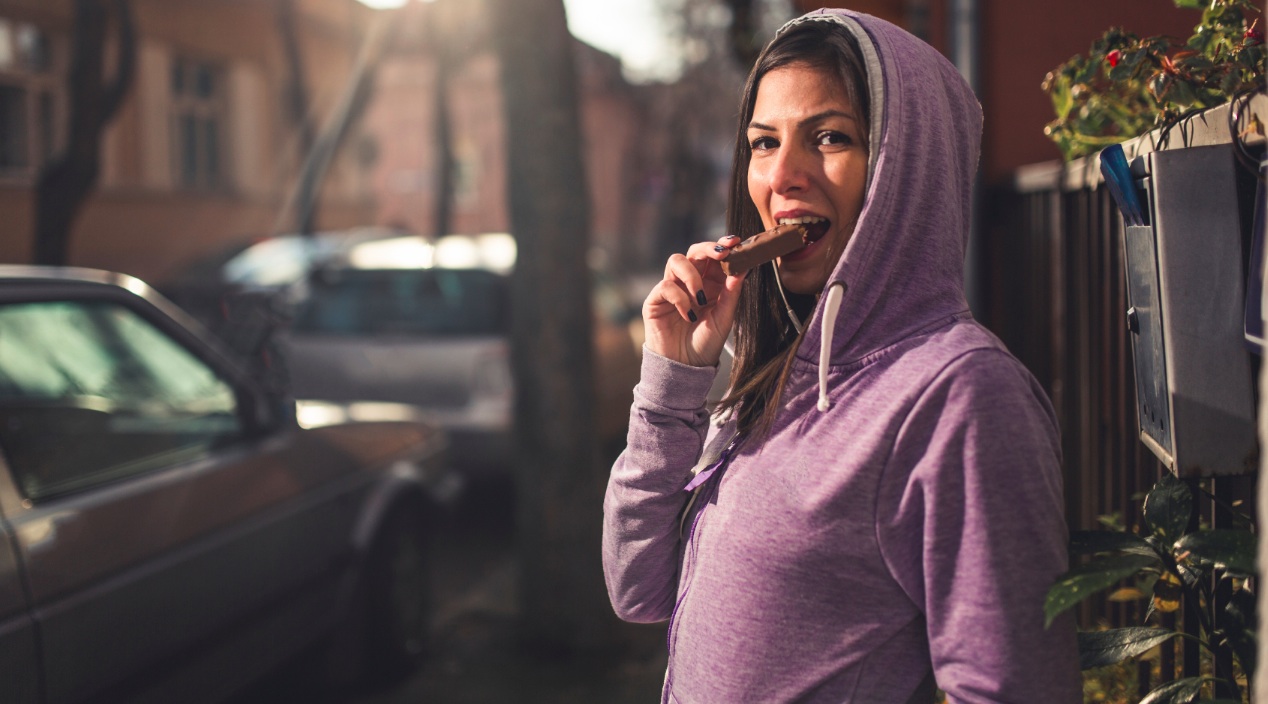 The ‘invisible food’ that prevents your weight loss

Published on December 10, 2021 by Trainimal Woman

Do you eat well and exercise regularly, but the scales are stuck? Will the ‘muffin top’ that swells over your jeans not go away? Very strange, isn’t it? Maybe there’s something wrong with your metabolism?

No. You’re eating without noticing, you’re eating on the sly. Sometimes you know it and sometimes you don’t. A little here and there. A few times a day, maybe even a few times an hour. This food is seldom recorded in the food diary that you show your coach. You don’t show this food off on Instagram. This food doesn’t really exist. It’s ‘invisible’. And the calories that the ‘invisible food’ contain ought to be called ‘ghost calories’, since you gobble them up so quickly that the body really shouldn’t … have time to register them.

Well, you don’t fool me. Been there, done that, bought the T-shirt. As an old food addict (being 25 kilos overweight for the best part of my adult life, until I drastically changed my diet), I have eaten LOTS of ‘invisible food’ over the years. There’s a cruel, but fitting saying: ‘What you eat in private, you wear in public’.

Let me give you an example of what things were like for me on a day-to-day basis a few years ago (I do have relapses, but only brief ones):

I get up and make the children breakfast. I lick the butter knife before putting it in the dishwasher. My son loves peanut butter on his bread. Imagine being young and able to eat lots without putting it on anywhere! I put a teaspoon into the peanut butter to taste it. And then another one. But I wouldn’t dream of putting it on my bread. No, that would be INDULGENT! The older boy doesn’t finish one of his slices of toast. I take two big bites from it before throwing it in the food waste bin. Is there anything nicer than toast? Not that I’d eat it myself for breakfast, good Lord, no. No, I go for the healthy option. Rye Bread. Or porridge.

When I have dropped the children off at school, I make myself breakfast. Wholemeal bread, rich in fibre, with roast beef. And cottage cheese. And a boiled egg. It feels so nice to eat such pure and substantial food.

As I go to put the wholemeal bread in the larder, I see a piece of chocolate that’s fallen out of Saturday’s bag of sweets. I eat it (before it goes off).

On my way to work I find a few boiled sweets in my coat pocket. I haven’t worn the coat for a long time, and I probably put the sweets in my pocket back in the day when I was such a  bad person as to eat sweets on a normal Tuesday. I might as well eat the sweets so that I won’t get tempted later.

When I arrive at work, I’m feeling stressed, having just remembered that I’ve got a meeting booked in. I dash past the coffee machine and opt for a ‘chocolatte’, which is a bit sweeter than the sad brown stuff that tends to be on offer in the meeting room. There are cinnamon buns at the meeting, but of course I don’t eat things like that. Not in public, anyway. I’ve just started blogging about my new healthy routine and it wouldn’t look great if I was seen eating buns. I mean, what if someone were to take a picture and post it? No, can’t have that.

Damn, forgot the healthy lunchbox that I’d prepared at home. A colleague tempts me with lunch at a restaurant, and who could refuse? She’s running late, though, and asks me to find a table. Before she arrives, I’ve had time to have three bread rolls (white), dipped in oil with a bit of salt and pepper. We each order a chicken Caesar salad. Nice and fresh! The Parmesan cheese and the dressing taste so good and the bacon is nice and salty. All that salt makes me thirsty. On my way back to the office, I nip into 7-Eleven to buy one of those frozen yoghurts. It tastes just like ice-cream but isn’t nearly as unhealthy!

I remember that I need to pick up a dress from the dry cleaner’s next door to the office. While I’m awaiting my turn, I politely accept the fruit chews that the shopkeeper offers me from a bowl.

Afternoon coffee break in the office. There’s been a birthday and there’s home- made cake on offer. I decline, since everyone knows that I ‘don’t eat things like that’. But when everyone has gone back to their desks and put the coffee cups in the dishwasher, I sneak into the staff kitchen and have two of the remaining pieces of cake. I quickly remove all ‘traces’ of crumbs from my top and go back to my desk.

Back home, I cook for the children. I taste their sausage stew to make user it isn’t too spicy. They don’t like that. Yum. Tastes pretty good, even if it’s a bit mild. I also taste the rice to see if it’s ready. It’s a bit tricky to decide whether it’s done without tasting it with the sausage stew. I mix a little mini portion in a cup and eat it. Definitely not on a plate, I’m not EATING their food, just checking it.

Have dinner with my husband. I make sure to remove unnecessary carbohydrates. We’re having roast chicken with broccoli and crème fraiche. It feels nice to be eating healthily! Wholesome! After dinner, I feel I can treat myself to a large latte with skimmed milk. I sprinkle some cinnamon on top.

That’s what it used to be like. Day in, day out. The accumulated extra calorie intake IN BETWEEN the planned meals must have been, what, 1,500-2,000 kcal? And I was wondering why I wasn’t seeing any results …

How to stop eating ‘invisible food’:

Be prepared. ‘Fail to plan and you plan to fail.’ It’s ALL about planning. If you have the slightest tendency to an unhealthy relationship to food, or if you have a weak character, quite frankly, you need to prepare for war. Lunchboxes prepared on Sunday evenings for the week to come are THE BEST.

Start with an hour at a time, not a day at a time. ‘If you take it a day at a time, you’ll see that your craving for sweets disappears!’, the know-it-all types will often chirp. That just doesn’t work for someone who’s not yet quite in control of the situation. Getting through an entire day without those extra meals is a MAJOR challenge in the beginning, believe me! Many people give up, as they find it too hard. The challenge seems too great. Do it in shorter stints, I would say: set smaller targets. One hour at a time. Think, ‘Don’t put anything extra in your mouth until 10.00!’. When the clock has struck 10 and you’ve succeeded, you set another target. You can then start raising the bar as you go, with half days. Next, it’s full days, a week and so on.

Don’t just think about what you eat, remember that what you drink may contain lots of ‘ghost calories’! And drinks slip down even easier than the things you chew … Sure, coffee is OK. But takeaway lattes are often high in calories. And worst of all are the coffee machines with coffee that contains lots of sugar and additives.

Sweets are the worst of all evils. You ought to give them up completely, and that way you won’t need to think about them at all. Not only because they give you insane amounts of energy without any nutrition, thereby giving you an unnecessary energy surplus, but they ALSO contain artificial additives, which your body really doesn’t know what to do with. You could compare it to dropping a paper bag in the wild vs. a plastic bag. The paper bag will decompose eventually. But the plastic bag will be there for ever and ever. That’s what it’s like for the body to deal with ‘plastic’, all the E-numbers and added stabilisers, which are a particular feature of gummy sweets. And don’t think that natural sweets are any better. If you look at the contents of those, you’ll see that the chocolate sometimes contains glazing agents and other nasties. Also, the sugar doesn’t fill you up, it just makes you want more. I think we should be able to enjoy sweets from time to time, such as brownies, buns or nice, home-made desserts. Sweets are one of the best things in life. But gummy sweets you should consider excluding completely from your diet, because they give you absolutely nothing.

Stick to three steady meals a day, and one good snack at fixed times. Stick with breakfast, lunch, snack of good quality and dinner. Square meals with good food that is high in protein to keep you feeling full. Preventing hunger with a set routine can do wonders.